Gooseberry Bluff is not a school for the chosen ones. It's a school for those who have run out of choices. An unlikely place for an international conspiracy. But after suspicious paranormal signatures are reported and a professor of magical history goes missing, the possibility of demon trafficking seems more and more likely.

St. Paul, MN – February 4, 2013 – With his new Kindle Serial GOOSEBERRY BLUFF COMMUNITY COLLEGE OF MAGIC: THE THIRTEENTH RIB, Nebula Award-nominated author David J. Schwartz is joining a pioneering group of writers that are forging into new frontiers -- with their feet planted firmly in the past.

Combining the uniquely modern phenomenon of e-books with the distinctly retro appeal of serial novels, Amazon Publishing's new Kindle Serials program offers full books bought up-front for as little as $1.99, then delivered episodically to readers' Kindles on a set cadence. GOOSEBERRY BLUFF COMMUNITY COLLEGE OF MAGIC: THE THIRTEENTH RIB is the first Serials to be released in 2013 by 47North, Amazon Publishing’s imprint for Science Fiction, Fantasy and Horror. As the series unfolds, readers have the opportunity to provide feedback and discuss the Serial with each other in community forums.

"Before TV and before comics, writers like Charles Dickens and Alexandre Dumas were working in the serial form," said Schwartz. "I'm looking forward to the fun and challenge of making that three weeks between episodes into an escalating agony of suspense," he joked.

GOOSEBERRY BLUFF COMMUNITY COLLEGE OF MAGIC: THE THIRTEENTH RIB, the first season set in Schwartz’s fantastic contemporary world, begins the tale of Joy Wilkins, an undercover agent with the Federal Bureau of Magical Affairs, as she starts her first semester of teaching and investigating the alarming activity at this school of magic on the border of Wisconsin and Minnesota. The deeper she goes, the closer she gets to dangerous secrets that could threaten her entire world.

David J. Schwartz is the author of the Nebula Award-nominated novel Superpowers as well as the novella The Sun Inside. He has written more than twenty-five short stories, which have appeared in such publications as Strange Horizons, The Year’s Best Fantasy & Horror collections, Paper Cities, Lady Churchill’s Rosebud Wristlet, and the World Fantasy Award-nominated anthology Twenty Epics. Visit his Amazon.com author page at http://tinyurl.com/b3j5kxh, or follow him on Twitter at https://twitter.com/snurri. 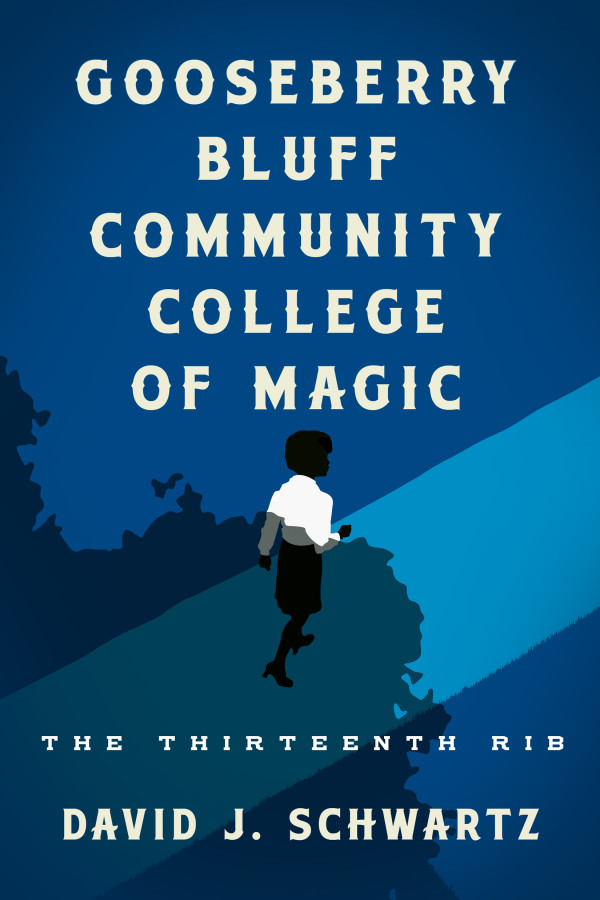